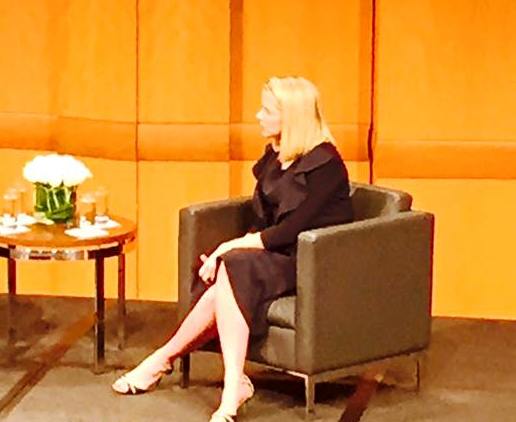 I read enough Spider-man early readers with my son to have a certain line from dear Uncle Ben memorized: “With great power comes great responsibility.” As anticipation for Yahoo! CEO Marissa Mayer’s visit to the CLE peaked last week, I couldn’t wait to hear her take on her limited maternity leave while in the top spot and more about her stance on telecommuting (she nixed it from Yahoo! during her early tenure).

Unfortunately, neither topic was tackled during her conversation with Cleveland Clinic Chief Executive Toby Cosgrove (why???) and there wasn’t an opportunity for Q&A. After listening to Mayer describe her thought process for the major decisions in her life when it comes to her career, and my own reflection, I feel as though I might have a better understanding of her personality and why she would avoid tackling a topic that’s also personal.

Mayer comes across as an incredibly smart talent with a crushing work ethic. She said multiple times that she is shy and introverted so I can only imagine that she’s someone who puts her head down and pursues her own path, ignoring the unwanted influence of others. As a parent, how you spend your maternity leave is a personal choice. However, as a CEO, you’re expected to announce your maternity leave.

On her tumblr , Mayer noted that she is “extremely energized by and dedicated to both my family and Yahoo” and that she plans to take limited time away and will work throughout her maternity leave. As a CEO and a parent, I hope that Mayer understands and acknowledges that the women of Yahoo! (and all over the world) are watching her. It’s critical that she communicates within her organization, however informally, that she has means (help, $, status) that many do not and that her choice is a personal one, not expected to be duplicated.

My own lesson learned

I learned a related lesson (on a microcosmic scale) a few years ago when I returned from my second maternity leave during which I happily hopped on conference calls with my team, brought my baby to lunch with my boss and regularly responded to email. Before my leave, I worked my ass off to launch a huge program at an event on many’s bucket list. I did not want to lose the opportunity to lead when I returned. But, I also am someone who liked to stay in touch during my leave. It helped me to feel connected to my whole self.

As I talked about my leave once I was back at work to younger female colleagues, some of their faces looked horrified. I realized that even though I thought my leave was unique to me, it still influenced how others thought they should behave on their own maternity leaves. I keep that memory close to me now in my role at work. It’s the same reason why I no longer send late night emails when I’m catching up on work.

The lesson for us? Understand and acknowledge that your choices influence others. Be self-aware and communicate with your team to set expectations.

We have the responsibility as leaders.