The Top Four Reasons I Stalk My Kids Online 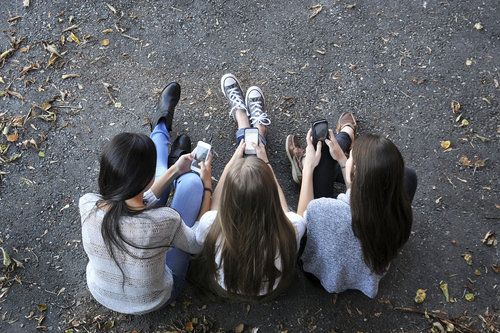 If you’re in my age bracket (days away from turning 40- sigh), then you’ve probably been called a helicopter parent. And I get the stereotype – we are strange creatures compared to our parents. We truly hover, we overly hug and compliment and we even sometimes try to force our kids to spend time with us.

Trust me. I get how strange it looks – it certainly wasn’t how I was raised nor was it ever how I thought I would parent. But it’s who I am now, and to be honest, I don’t give a damn if you think I’m nuts.

It’s a different world out there now. From what I hear, my dad had to walk in 20 inches of snow for fourteen miles uphill both ways to school back when he was younger.  And my mom barely slept in high school because she did laundry all night to help her mom while she was growing up.

Do I think those things really happened to that extent? No. But do I think things are dramatically different from generation to generation – and with the advancements of technology, our world is changing at a rapid pace. Studies show the changes that are happening NOW year-over-year are equivalent to what used to transpire over TEN YEARS.  So when you really break down why parent involvement has shifted so profoundly – think of that. We are barely able to keep up with what is happening online or in our schools.

So this is where my stalking habits come into the discussion. I will admit without fault that there are times I track my kids’ phones, I look at their text messages when they go to the bathroom and I make them approve me as followers on Instagram and twitter.  I haven’t done it on snapchat, only because I am too old to learn it (please see comment about my age in first paragraph).

When people hear this – some nod vehemently in agreement. Others say to me with an eye roll that I need to learn how to trust my kids and let them make their own mistakes – that is a part of growing up.

And I really do understand this philosophy. The colossal mistakes I made in my teen years have definitely helped shape me now. But one small difference – those mistakes don’t live in perpetuity online for every college recruiter, professor, CEO or potential love interest to play online over and over again.  I gladly smile with relief knowing that my kids will never be able to find videos of me in college (or my parents, thank GOD) doing things I simply can’t even bring myself to type.

So while I don’t expect you to do what I do – I did want to clarify why some of us do it.

Here are my top 4 reasons, I stalk my kids online:

And it’s just as important for the parents of the bullies. Have you glanced at the news stories of how many teens are going to jail or being criminally charged for a “hateful” tweet or for posting private videos? And let’s not forget the parents who have now been charged for their kids’ actions.  One mistake by your child tweeting in anger could saddle them or you with a felony charge.

If that doesn’t scare you – ask your teenager about “spice” – see if they tell you what it is.  Call me if you need to talk after that conversation!

So I will end with this—I don’t look at my kids’ phones and immediately ask them about it or start screaming about what I see. But it shapes our dinner conversations and I listen a little more closely when I hear some of these trigger words in my car during a drop-off at a party. I don’t spend every waking minute stalking them – but I do think of it as part of my job. My job is to keep them safe. And their world is now primarily online. So just like my mom used to call to see if parents were home before dropping me off at a party – I have an obligation to know or to try and understand what they are doing online.

To me – this is the new norm. If we’re going to let our kids spend half their lives on their phones, we need to live and hang out there a bit too.

For those who disagree completely – I guess I understand. The virtual world is a scary one – and many don’t want to visit at all. But know that your kids are living there – every day. You may want to at least pop in for a quick visit.