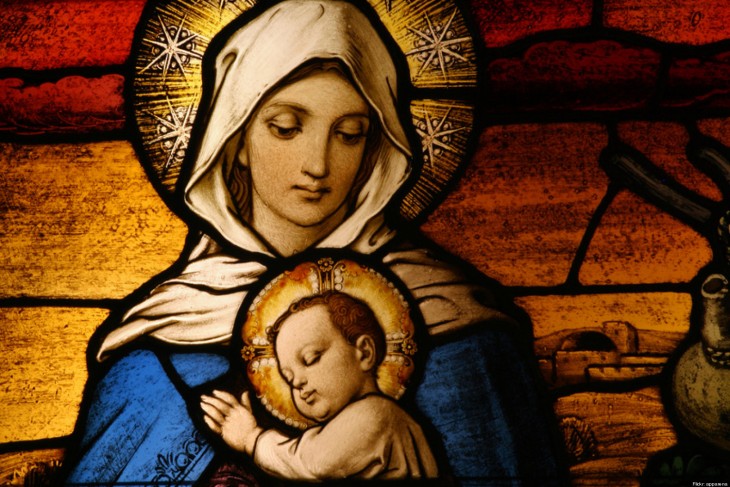 At a very early age, I was told by my very Catholic Aunt, that the way to Jesus Christ was through Mother Mary. My prayers were always directed to her asking her to please speak to her son and help me out. I think I prayed to her so long that I started to relate to her job. I believed she talked to her child and made suggestions and reasoned with him.

And when I became a mother of three, I somehow assumed this responsibility with my own family.

I became the voice of reason, the go between. I calmed volatile situations – and became the fixer.

I was the one who had to break the news to my husband when one of my darlings made an unfortunate mistake. Mother Mary was the go between until everything was smoothed over.

Each time my wonderful daughter wrecked our tractor (five times) or our cars (more times than I can count), she would lock herself in the bathroom throwing up, and Mother Mary defused the situation.

As my boys were caught jumping off the roof into the swimming pool, Mother Mary was the voice of reason and kept them from being grounded for the rest of their lives.

When my children fought and said ugly things to each other, Mary Mother was the fixer and mediated a peaceful resolution.

And so it went for many, many years.

And even when my children were grown, somehow I remained Mother Mary.  My kids thought I could make my husband quit smoking. They didn’t want to approach the subject with him and hurt his feelings. That was Mother Mary’s job.

When conversations among siblings became uncomfortable, Mother Mary was called to duty. When squabbles erupted over where to have Thanksgiving dinner, Mother Mary the diffuser quickly jumped in and found a reasonable compromise.

When a family vacation was long overdue but a location or date was far from being realized, Mother Mary stepped in and planned it.

Flash forward to today. Mother Mary has aged and put in a good 50 years worth of work and is ready to cash in on her retirement.  I’ve decided I no longer want to be the fixer and that my reign is over.

I’m sure my family could always pray and look to the real Mother Mary for guidance.

But either way, it’s time for my little darlings to be adults. And to solve their own damn problems.

Cathy Allen is a retired teacher and proud mother, grandmother and wife. She resides in Youngstown, OH for the warm months and in true, snow-bird style, heads to Florida when the snow comes.