I Hope You Find Your Peace 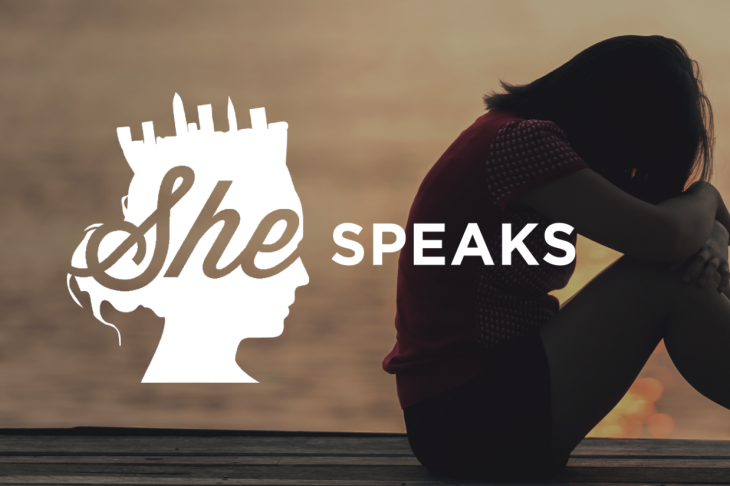 “She Speaks” is an anonymous blog series that allows women to share their stories without revealing their identity. It is designed to make sure that all women’s voices are being heard and is not a forum for passive aggressive bullying or anonymous bashing, of a person, group or company. If you want to submit a post to She Speaks, email [email protected].

It’s incredible how one song can transport you back in time so vividly. Kesha’s new song “Praying,” which feels like a direct message to her alleged rapist, took me on an unexpected journey back in time to a place I had hoped I would never have to visit again.

“I hope you find your peace, falling on your knees…praying.”

The first time I heard the song, I was driving in my car. Thankfully, alone. By the time I figured out the singer was Kesha, and made the connection to the headlines and coverage of her long and controversial trial that gossip columnists acted out daily for millions of viewers, my t-shirt was soaked with tears. Something I thought I buried years ago suddenly was living again, perfectly preserved.

My story isn’t a textbook parallel to Kesha’s. I wasn’t assaulted for years or threatened to remain silent by an industry and a powerful figurehead who held the keys to my success. But something was taken from me – something I will never get back. A belief that I would be safe with a partner whom I loved and whom I believe loved me.

Almost 12 years ago, after an argument, I was physically and sexually assaulted by my boyfriend in the home we shared. It had never happened before – not even a shove or a slap so the severity of the assault in both forms was hard for me to comprehend. And more importantly, as a strong, very successful business woman at the peak of my career – it was something I didn’t want anyone to know.

I will spare you the details of how I managed to slip under the radar of my friends and family for a month and the lies I told at my job to work remotely while the visible repercussions slowly disappeared. I will not share with you how often I thought about suicide at that time – as I had to simultaneously deal with an unexpected break up with someone I loved and the reality that I was just violated in my own home by someone I planned on marrying.

Like I handle most tough issues, I got through it with my head down and dealing with it on my own.  For close to 60 days I never once left my apartment except for the day he came to move his stuff out – and only then did I hide down the street, out of site and completely covered with a coat, hood and sunglasses.

He called, wrote to me and pleaded to give him a second chance. I never did.

He begged for forgiveness and asked me to meet him in person to talk it through. I never did.

I moved on. Slowly and carefully. I never once saw him again. And till this day – only three people on the face of this earth know what happened. A dear friend who lived out in California, him and my husband.  My friend was safe – she was a thousand miles away and she helped serve as my cover as someone I was visiting for a long trip. I did share some small details with my husband many years later once we began dating – but made him promise to never bring it up to me again.

But for the most part, I was on my own. A path I chose – so I wouldn’t have the shame of telling my mother and father, wouldn’t have to deal with the whispers from friends or side glances from colleagues. I wouldn’t have to try to explain how there were no warning signs, no signals or no prior instances of abuse. I didn’t miss anything or turn a blind eye to the warnings.

I also didn’t file charges, I wouldn’t admit to doctors or police officers what really happened, and I buried it deep down in a dark, dark place where I knew it would stay safe and hidden.

“I hope you’re somewhere praying; I hope your soul is changing.”

Until the day I heard the song. It came back to me so fast I physically became ill and had to pull over on the side of the road. Suddenly, the realization that almost 12 years ago, I was beaten and raped. And I never really told anyone. I never said it out loud, I never used the word “rape” – and I never checked the mental box that I was a survivor or that I had lived through an extremely abusive attack.

And I never really gained closure with the person who attacked me. I walked away – never looked back and have done everything in my power to never think of him or about that night again.

As I type this, my hands are shaking – as I read the words out loud, my voice is quivering. Where do I go from here, now that it has re-entered my mind? Will it easily go back down in the ground – can I bury it again?

For the first time in 12 years, I think I’m okay with it staying out. I’m not planning on going public (I’m clearly writing this anonymously), but I don’t have this immense desire to deny it any longer.

Could this song have changed that for me? Could those words – so simple yet so incredibly powerful give me something I couldn’t find for more than a decade? Closure.

Maybe thinking about him again has been good. Realizing that I do hope he finds his peace. I hope he falls to his knees and prays when he thinks of that night and what he did to me. It doesn’t mean I have forgiven him. That isn’t in me. But maybe, just maybe, like the words imply –  I am at peace with knowing his fate lies somewhere else.

“Oh, some say, in life, you’re gonna get what you give. But some things, only God can forgive.”

Thank you for reading this. Thank you for listening to a woman who never once told this story. And thank you for allowing me to keep my anonymity…for now.

I give a voice to the women who are concerned about sharing their story publicly. My mission is to give a voice to the women who want to start conversations, but who are concerned with sharing their identity, for one reason or another. My posts don’t reveal personal details that can identify particular people nor do I promote bullying or bashing others. I am designed to give women who can’t share their names an equal voice in the important conversations we are having at She In The CLE. Want me to share your story? Submit a post at [email protected]