What You Should Check Out In: March 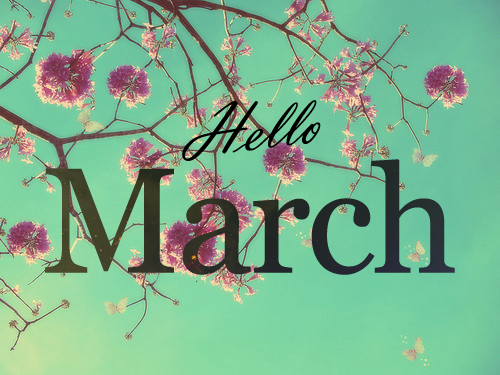 With the winter months finishing up and the shining light of spring break in the distance, March is the final stretch to push through before you can reward yourself with a much needed vacation or staycation (both of which are equally satisfying). So, with this motivation in mind, here are a couple things you should check out that’ll help you through the madness that is March (pun intended – did that one for you dad).

Blackhead Removal Mask ~ Now, if you’ve been on Twitter within the last two months, you’ve probably seen videos of people trying out this mask. There is upbeat techno music in the background and the girls in the video are always young, pretty, and seem like girls that are way too cool to be friends with you *eyeroll*.  Anyway, they apply the mask, wait for it to dry, and then peel it off slowly so that the camera can zoom in and the viewer can see the dirt physically being removed from your pores. I’m not going to lie to you, it’s oddly very satisfying. So, after the 50 millionth time seeing one of these videos, like any skin conscious teenage girl who secretly wants to be one of those girls, I want my own magical blackhead removal mask. So, little broke me, whipped out a Visa giftcard I got for my birthday two years ago and took matters into my own hands and purchased my own little tube for $14.99.

It took forever to get here, but it’s alright because in the end it was so worth it. I have very sensitive skin, so at first I was a little concerned when my face began to tingle but the feeling soon went away and my face went stiff and I imagine that’s what Botox feels like. I waited a full 15 minutes for the mask to dry, (it suggested 7 minutes but I wanted to play it safe) and then proceeded to peel it off. I’m not going to sugarcoat it, that was THE most painful experience in my life. A few tears were shed and a few inappropriate words were dropped, but in the end my face felt amazing. I will give you a few tips though. I would suggest only applying the mask to your problem areas for blackheads ( i.e. nose, chin, etc) because there isn’t a lot of mask in the tube and since a thick layer is required for this to be effective, wasting it on areas such as your cheeks where there aren’t many issues would be unnecessary. In the end though, the smoothness of my skin  right now is unreal. I was pleasantly surprised with my results and would highly recommend this product, especially if you’re headed to the beach for spring break, where a clear face makes life much easier.

Seriously, you can’t tell me this girl doesn’t look cool!

With spring break right around the corner you will be needing some tunes to listen to on the beach. Well lucky for you, I have just the right playlist. With a mix of feel good songs (Play that Song ~ Train), boppy tunes that will get stuck in your head (Touch ~ Little Mix), and a couple classics that will get you feeling nostalgic (Sweet Caroline – Neil Diamond) you will be jamming and tanning all break long.

Rock out to this playlist all month long

And don’t forget to keep an ear out for some of my favorites:

Ainsley is a 15 year old girl who currently lives with her mom, dad and sister in Olmsted Falls, Ohio. Throughout her nine years of schooling she quickly learned that while she is an all-around smart girl, her real talents lie in reading and writing. Ainsley is very involved in her school and is a cheerleader, track runner and an active member in student council.

Ainsley has always had a love for the arts. While she can’t sing a note to save her life, she enjoys dancing, reading good books, writing short stories and listening to different types of music. In the past year she has discovered a love for fashion and enjoys experimenting and playing around with clothes. Her other interests include going on adventures with her four best friends, spending time with her beagle Tess (who she loves more than life) and making cookie dough.

When she gets older Ainsley wants to pursue a career in fashion journalism or write for a women’s magazine (or start her own because why not). She also hopes to travel the world and have as many new experiences as possible. Until then though, she’s just working on getting her driver’s license and passing bio.