The Boy In Ruby Red Slippers 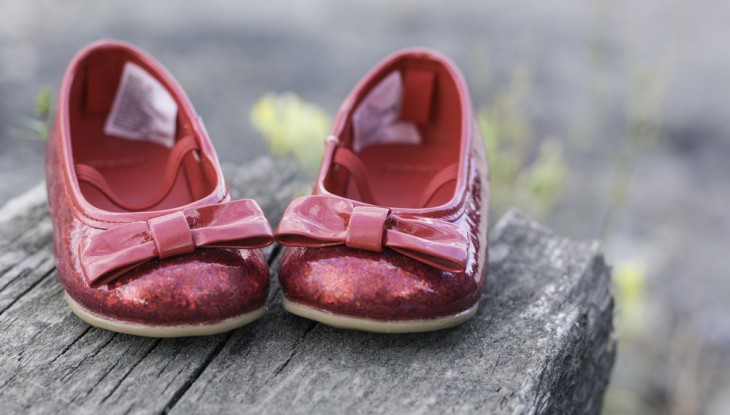 This week a story about Virginia dad, Paul Henson, and his adorable three- year- old son Caiden has been blowing up the internet.  Paul allowed Caiden to dress up as Elsa from the movie “Frozen” and even agreed to dress up as Anna—Elsa’s little sister. Caiden & Paul’s story reminded me of an experience that I had when my son Kamani was around three or four.

I was leaning on a wall at my son’s preschool, waiting the requisite 10-15 minutes it always took for him to accept that it was time to go, when another little boy caught my eye.  The boy, whose name escapes me after all these years, was wearing sparkly, ruby red slippers.  I looked around to see if any of the other children were “dressed up” since the preschool always had a healthy stock of make-believe clothing. However, not one of the other kids was wearing anything out of the ordinary.  I’m sure I must have looked perplexed; I was definitely confused and conflicted on the inside.  Why was this little boy wearing “girls” shoes?

As the universe would have it, the boy’s father was the next parent to arrive. We exchanged pleasantries and then without warning he turned to me and asked, “What do you think of my son’s shoes?”  My brain was screaming because I had no idea of the answer.  Honestly, I don’t even remember what I said.  I believe that I mumbled something like…”interesting” or “nice shoes.”  His dad responded by telling me how much his son loved the “Wizard of Oz,”especially Dorothy.  He shared that when his son saw the sparkly, ruby red slippers in Target he had to have them.  The dad beamed with what I interpreted as excitement and pride. I smiled politely, all the while wondering whether or not I would have bought the ruby red slippers for my own son.

I was clear that a little boy wanting to wear ruby red slippers was not an indicator of his gender identity or sexual orientation. Simultaneously, I was clear that my son’s gender identity and sexual orientation would not have changed my love for him in any way.  So why did I care?  Why weren’t the shoes a no brainer?  At the time, it seemed complicated.  During my son’s early years, I was young, black and single. For anyone who is wondering why that matters, there’s a pervasive belief in this country that single mothers (especially black and brown ones) are somehow responsible for everything from poverty to poor educational outcomes.  A complimentary and equally negative myth is that women can’t successfully raise boys into men.  To combat that, I wore imaginary Wonder Woman power cuffs daily.  I used them to deflect stereotypes about what would become of both of us. Bottom line: I cared too much about what people would think and say about me, my parenting and my son.

Most of the posts and stories I’ve seen about Paul and Caiden have been overwhelmingly positive. It isn’t lost on me that gender, gender identity and race could have impacted the reception of this story—though I would love to be wrong here.  Would the response have been the same if Caiden’s mom had posted the picture?  What if Caiden identified as a girl? Would it have mattered if Caiden or his dad’s racial background had been different?  Who knows? Perhaps the most important question is, “Would you buy the sparkly, ruby red slippers for your son?”

Optimistic in spite of all evidence to the contrary and stubbornly committed to changing the world…for the better. Facilitator, coach, advocate and artist.