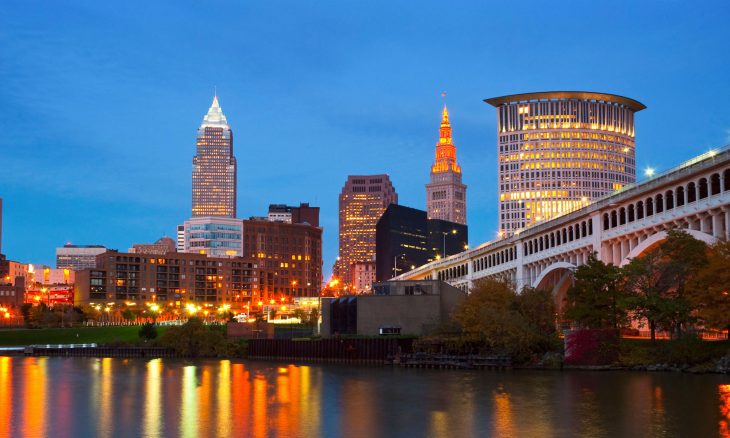 It started during the Cavs finals. I’d be too anxious during the games that I’d find myself walking around outside of the bar or calling a friend in another city to distract me until the game was in its last moments and I could bear to sit with my friends and watch until the final buzzer. The anxiety has crept back in during this World Series. “You’re not even from here,” my boyfriend not so gently reminded me towards the end of the AL Championship Series. He’s right. I’m not from here. I’m from a small city in upstate New York with no official affiliations to any major sport. I have become a proud bandwagon fan. But it’s more than being a sports fan; it’s being a fan of Cleveland.

With every shot, every throw, every ticket sold, I’m rooting for this city. By now, talks of Cleveland’s “revival”, “renaissance” and “rise” have become standard fare, on the verge of entering the cliché realm of talking about the weather. The thing is, it actually IS exciting to discuss Cleveland’s growth. With each new conversation, I learn of a new initiative, organization or opportunity to become further invested in the Greater Cleveland area. A couple years ago, I was living in St. Louis when the Cardinals were in the World Series, but I didn’t feel this kind of fervor. I would go out to watch the game and be more interested in the type of pizza I was ordering.

There’s something about Cleveland, the indignation of always having to explain or defend it to those not familiar with the lure of the city. It’s hard to describe the atmosphere of a Saturday morning spent doing yoga at the House of Blues, followed by perusal of the Cleveland Flea or tout all the different dining options I have on a Friday night in Tremont. But a sports title serves as a tangible sign of our growth that I can share with my friends in other cities. The championship banner serves as a proof point of progress our city is making, my city is making. And that is what makes my heart race every time a pitch is thrown or basket is made. Plus, who doesn’t love a reason to celebrate downtown surrounded by people who love this city as much as you.

Olivia is originally from upstate NY, but moved to Cleveland for undergrad. Upon graduation she moved to St. Louis where she became passionate about creating opportunities for educational equity. She was lured back to Cleveland 3 years ago and enjoys discovering a whole new side to the city, residing in Tremont. Involved in the non-profit sector, Olivia is always searching for ways to permanently improve Cleveland. She is grateful for her amazing friends, and enjoys their company while playing ultimate frisbee, musing about life, and testing new flavors of Slim Jims.