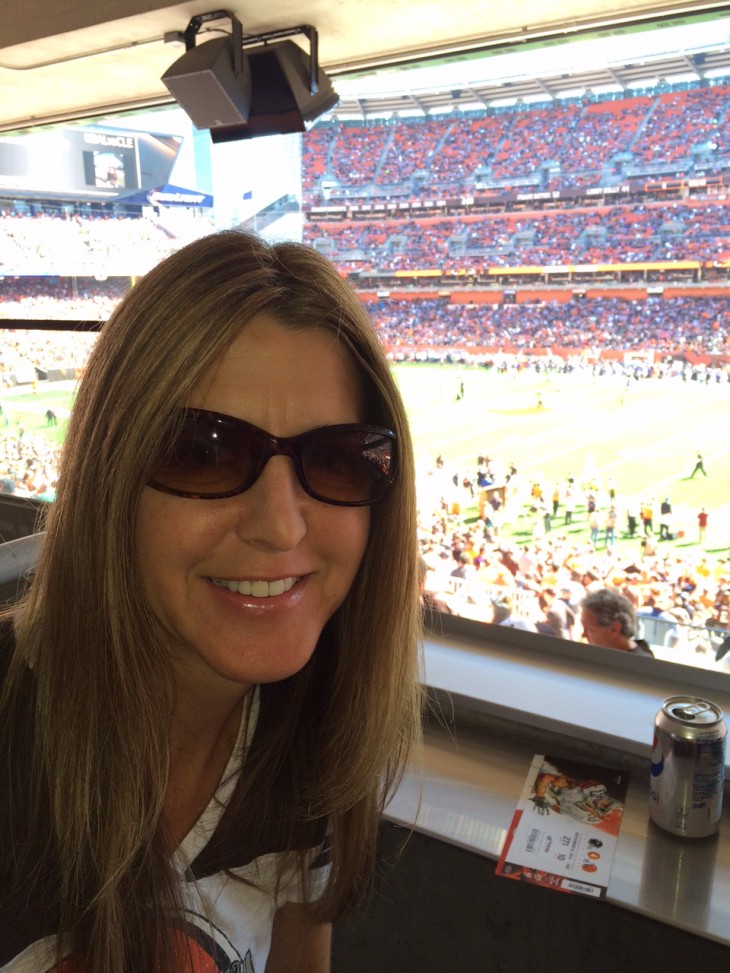 I was going to attend my first Browns game in person at Cleveland Municipal Stadium and I had been waiting weeks for the big trip downtown.  I had a nervous energy all day at school and could not wait to jump on the bus and get home.

The drive to the stadium felt like hours and the walk from the car even longer.  Once inside, it felt like Christmas morning.  You could feel the electricity in the air with 80,000 people screaming and chanting “Here we go Brownies, here we go!”

At the end of the night, I witnessed the Cleveland Browns upset “America’s Team,” the Dallas Cowboys, on Monday Night Football in what would end up being one of my greatest moments as a Browns fan.  It didn’t matter that the team finished 9-7 that year and missed the playoffs, it was the thrill of sitting among my fellow rabid fans screaming in unison to a national TV audience that watched us take down one of the best teams in football 26-7 and forever hooked me into loving a team that has ended up bringing me more sorrow than joy.

I can’t remember when I actually started to enjoy football but when I was young my dad would watch games all weekend and my sisters and I would always ask him annoying questions.

“Why is the TV always flashing numbers like 3rd and 7 and then all of a sudden it says 1st and 10?”

“Why do the Browns always seem to get only three chances to score when other teams get a lot more?”

It didn’t make sense.  Having three daughters and only one son, my father felt it was his duty to educate all of us on the basics of football and once we got the general understanding we all became fans of the game.

As I started high school in the fall of 1980 most of my friends were only interested in school dances and hanging out at the mall.  Not me, I was too busy sitting at home memorizing jersey numbers of the current roster as well as reciting all the head coaches and quarterbacks of every team in the league – especially when called upon by my brother who was my study partner.

To this day, the only way I remember things like license plate numbers is to use Browns players as a reference.  If your plate number is ZE1743, to me it’s ZE-BrianSipe-Mike Pruitt.

I started a scrapbook at the beginning of that 1980 season and included every article written after every game along with photos, stickers and notes. This scrapbook was a labor of love and I wonder if I put in half that time to doing my actual homework I could have probably owned the Browns by now.

Little did I know that the 1980 season would wind up being one of the most exciting in franchise history with the Browns going 11-5, making the playoffs and in in what would become true Browns fashion, getting crushed by the Oakland Raiders on the last play of the game.

To say I was devastated would be an understatement.  I didn’t sleep that night.  I kept going over the last play in my head again and again…”why didn’t they just kick the field goal?”  Why did they throw that pass that ended up getting intercepted?”  I didn’t want to go to school the next day or the next week for that matter.

This was the first time the Browns broke my heart and I had no idea that it would continue to happen for the next thirty-five years and counting.

A lot of people ask me how I can continue to stay a fan.  To me, it’s like being in a marriage.  You love the person you are married to but you also hate them at times – yet you stick around because it’s a vow that you made.

And we will always be one.

Chris Lesko has parlayed her passion for sports into a career working for the Cleveland Cavaliers and Quicken Loans Arena for 20+ years! Chris has worked on some of the biggest sporting events to come to Cleveland including the 2015 NBA Finals, the 2015 Men’s NCAA Sweet 16 as well of hundreds of concerts. Chris and her husband Pete have raised their four children and are contemplating what their lives will be like as empty nesters. Chris is an avid fan of all Cleveland teams , the Ohio State Buckeyes and is an active volunteer with the APL and is a part of the Downtown Cleveland Advocate program. Chris and family reside in Westlake, OH.