I have a new goal in life: become a professional international wedding guest. So far I have one under my belt from my cousin’s July wedding in Plovdiv, Bulgaria.

I had only heard of Bulgaria from a friend and former co-worker who visits her husband’s family there every year. Once I booked my ticket, I couldn’t wait to let her know that I needed travel advice for a visit.

I fell in love with Plovdiv and I know I’ll be back for a more extensive tour of Eastern Europe. It was torture to be so close to countries I’ve wanted to visit like Greece (shares a border) and Ukraine and Poland (heritage). I remember a layover in Tokyo in 2008 on the way to Bangkok, which felt criminal. I was in Japan for 10 days the following year so I have the start of a track record.

The wedding itself and all of its charming customs are fodder for another post. For now, here are seven magnificent reasons why you should add Bulgaria to your bucket list.

1. Rich history and ruins Plovdiv is Europe’s oldest continually inhabited city since 6000 BC. Wander its promenade (the longest in Europe) flanked by shops and cafes, and you’ll stumble upon a Roman Forum, partially visible below. Walk the granite cobblestone streets in Old Town and you’ll find a Roman fortress wall that overlooks the city below as well as an amphitheater that hosted gladiator and animal battles and today features opera and other performances. 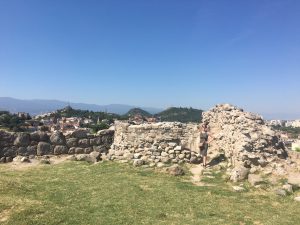 We took a day trip to Kazanlak and visited Thracian tombs built into hillsides. 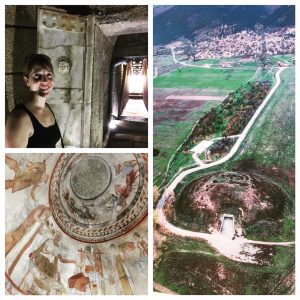 In Sofia, as you wait for the subway, you’re surrounded by beautiful ruins and frescos. 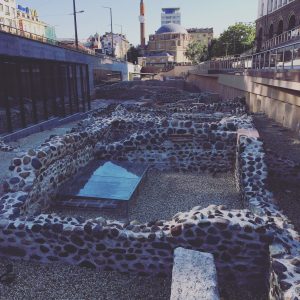 2. Live like a rich lady with the amazing exchange rate and low prices My boutique hotel was $25 a night, included breakfast and was a block from the promenade.

3. Eat and drink like a queen The food, a mix of Mediterranean fare and hearty meats, was fresh, flavorful and cheap (see above). Bulgaria is known for its fertile soil and the wine I sampled was some of the best I’ve had. Locally made rakia, a fruit-flavored aperitif that is batshit strong, silenced even my Irish uncle into a hearty Bulgarian buzz. 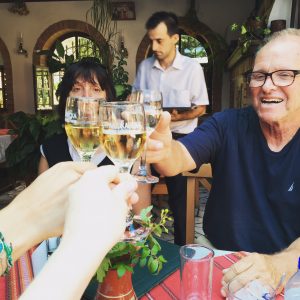 4. Beautiful landscape The Balkan Mountains flank the southern part of the country and The Black Sea marks the eastern border of Europe before Asia. We visited the Valley of the Roses in between the little and big Balkans where 70% of the rose oil used in the world’s perfumes is harvested. 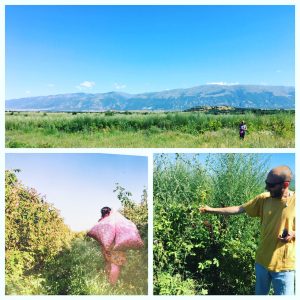 5. Charming architecture This intersection is my favorite, beautifully colored and stenciled homes built upon the tops of Thracian and Roman ruins with a Byzantine flair. Intersections made for the most coveted “gossip rooms” where ladies would eavesdrop on passers by conversations. I bought a watercolor of this spot since I love it so much. 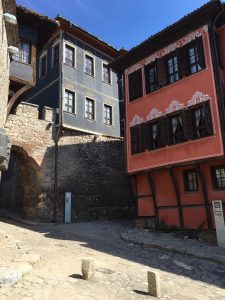 Sofia, the capital city, boasted the beautiful Alexander Nevsky Cathedral church with its distinct gilded dome. The PD featured a travel story about Sofia this Sunday by Rick Steves, so perfect timing!

6. Prevalence of English  Bulgarian isn’t the easiest language to learn traveler phrases (lots of mumbling) but it’s certainly not the worst. The written form is Cyrillic, which I was intimidated by, but by the end of the trip, my cousin and I started to decode letters and symbols. Decoding “restaurant” made us gleefully happy.

FUN FACT: head nodding for “yes” and “no” is opposite in Bulgaria. Hard habit to reverse!

7. Proximity to other travel destinations The whole country of Bulgaria is about the size of Tennessee, as a point of reference. As I mentioned above, Greece and Turkey border the south, Macedonia to the west, Romania to the north and the whole continent of Asia to the east.

Convinced? I hope so. If you’ve been or once you go, do tell your favorite spots.